A last-minute weekend trip before travel restrictions tightened up again.

At very short notice, on Friday evening, travel out of Manchester was still technically allowed, so I took the opportunity for a weekend on the watershed. It was past midday when I arrived in Garsdale, so I didn't have all that much hiking time.

Widdale Great Tarn sits basically on the watershed. The landranger suggests it drains to the east, but larger scales show it draining to the west. My interpretation - and that of the county boundary - places the tarn to the west of the watershed.

Wold Fell may only really be a subsidiary top of Great Knoutberry Hill, but here the streams on the Irish Sea side stop flowing via the Lune, and start flowing via the Ribble instead. Ribblehead is not far away - but technically the source of the river (albeit not named as such) must be somewhere in this direction. 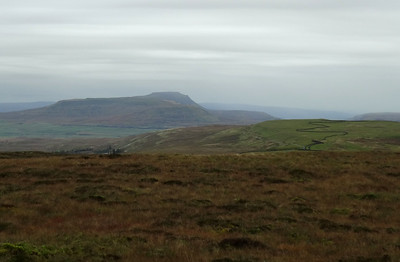 Dodd Fell has shallow enough gradients that I doubt any water falling on the summit actually flows west. But it's impossible to identify where the actual 'corner' of the watershed route is lower on the slopes, so I went up to the top anyway. Wherever it really is, here the catchment area on the east changes from the Ure (Wensleydale) to the Wharfe; each new drainage river giving its name to one of the prominent Dales providing a pleasing indication of progress.

The Cam Woodlands and neighbouring forests in Langstrothdale Chase caused some minor navigation issues, and by the time I got out of them, it was sufficiently far into the afternoon that I had to decide where to break this stage. I had initially hoped to make it to Pen-y-ghent, but that clearly wasn't going to happen. It wasn't too disappointing though, the mist having descended during the day and now being sat on the tops of each of the Three Peaks of Yorkshire, so I made a rapid exit from Foxup Moor, dropping down to the station at Horton-in-Ribblesdale via Hull Pot. 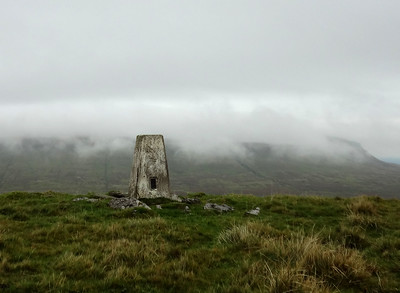