An eventual easing of lockdown restrictions let me journey down the length of the North Pennines, via Cross Fell and Warcop MOD firing range, and into the Yorkshire Dales

I returned to Gilsland on a fine day and made my way through one last forest before climbing into the Pennines.

On top of Whinny Fell, a local householder, walking his dog, was already aware of the proximity of the watershed to his house. He obviously knew a bit of the local history of the area, telling me about the dozens of former mine workings in the Talkin Fell area.

I camped on the way up to Cold Fell, on the shoulder of Brown Fell, within site of the lonely house of Gairs. 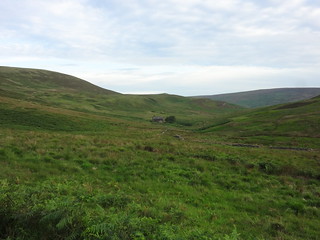 With quite a bit of rain falling in the morning, I delayed my start for some hours, and I wasn't feeling particularly energetic in any case.

The remains of a 1957 air crash on Farlam Currick were one of the few unusual sights on the ridge. 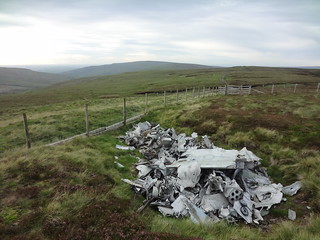 I frequently saw movements in the grass as I walked past - mice or voles, I think, darting back into their holes before I could look at them properly. And they were not ignored by predators in the skies. Over the course of the next few days, I saw numerous birds of prey - slightly to my surprise, most commonly owls.

I camped near Black Fell, and a short-eared owl briefly came and sat on a fence-post within 10m of my tent, apparently watching me. 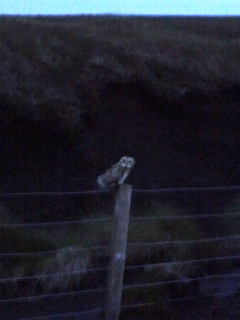 A warm and sunny day was in store for a significant landmark along the watershed.

After crossing the popular road summit at Hartside, I climbed steadily up to Cross Fell. It's the highest summit in the Pennines, and higher than anywhere else in England outside the Lake District, and is therefore also the highest point on the English watershed. It is also the location of a major catchment boundary change: on the eastern side, drainage changes from the Tyne to the Tees. And on top of that, Cross Fell, more or less, represents the half-way point of my entire watershed route, by distance. 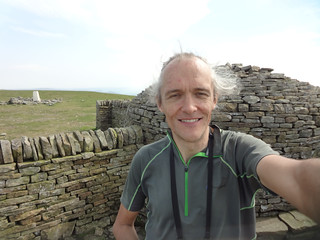 Of course, given the nature of the geography, terrain, land use and rights of way along the watershed, I consider that I have long since passed the half-way point in terms of time, amount of ascent and effort. Nevertheless, passing Cross Fell is satisfying since it firmly puts me into the second half of the route.

The next few miles were easy, as the Pennine Way follows the ridge-line across both Little and Great Dun Fells, and up on to Knock Fell.

At one point, another owl came practically face-to-face with me, in mid-flight, just a handful of metres away. I didn't quite have my camera ready at this point, so the picture shows it on another loop, just slightly further away. 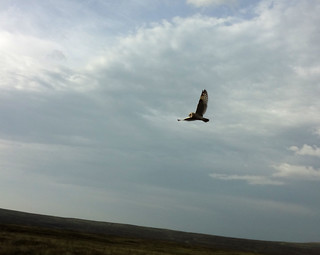 After a longer but more enjoyable day than yesterday, I arrived at what is definitely the most visually interesting place on this leg, High Cup Nick. A horseshoe of crags, jutting into the moorland with beautiful symmetry, frames High Cup Gill as it flows steeply south-west off the ridge. The watershed passes within metres of the top end of the Nick. 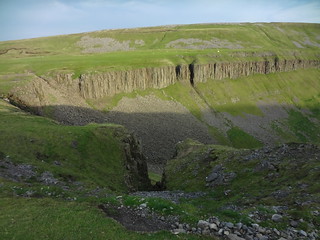 I aimed in advance to camp here, knowing it would be a great spot. There was already one other tent in place, and while I was pitching, another walker commented that he would camp somewhere not far away. There's plenty of space with reasonable pitches, so of course there was plenty of space for a few different campers.

A herd of black horses moved down above the escarpment on the other side, as the sun got lower. 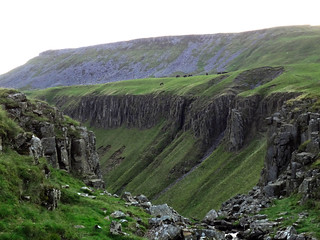 I had scheduled my trip specifically in order to reach High Cup Nick by this weekend - because the Warcop MOD firing range is situated across the watershed, and this was to be one of their pre-announced no-firing weekends.

After the sun of the previous day, I was surprised and a little disappointed to awake to mist, but it did move around and lift a bit as the morning progressed. 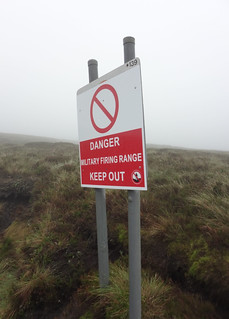 Apart from warning signs on entering and leaving the area, and a few distant glimpses of some kind of structures, perhaps temporary targets, there was actually little to distinguish Warcop from all the other moors I had crossed. I didn't see any items of unexploded ordnance.

By the time I reached the summit of Little Fell with its deteriorated OS triangulation column, the clouds had lifted well above the tops. 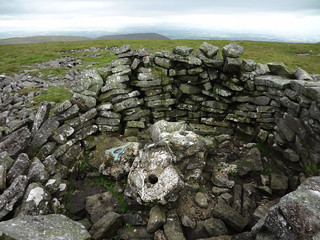 I continued on across Stainmore Common and Great Knipe, camping somewhere in the middle of anonymous and featureless Beldoo Moss.

Some unfortunately timed showers made the next morning less pleasant than it might have been.

Crossing the A66, a busy dual carriageway, was more work than for some roads, with walls and fences to climb, steep slopes to descend and not a lot of visibility around slight corners, especially with the rain.

It's a route following a significant pass across the North Pennines, and not far up on the south side, I came across the Stainmore pill-box, strategically positioned to overlook the highest point on the road, and therefore right on the line of the watershed. It's kind of unusual to see wartime installations like this inland in the north of the country. 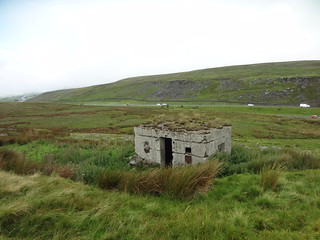 After a bit more fairly generic moorland, the rain finally cleared up, and I crossed the road that leads to the famous Tan Hill Inn, just a few miles east of the line.

Somewhere on Brownber Edge, the catchment on the North Sea side changes again - having been following the Tees drainage since Cross Fell a few days ago, the top streams of Whitsundale Beck now lead down via Swaledale, the Ure and the Ouse, and eventually empty out, like all the major Yorkshire Dales, into the Humber Estuary.

My immediate destination was one I had been looking forward to for some time - Nine Standards Rigg. The nine "standards" - cairns - were conspicuous from several miles before I arrived. Here is where Wainwright's Coast to Coast Walk crosses the watershed. 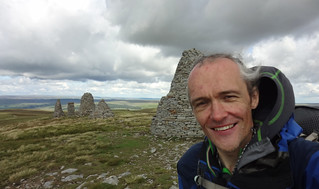 I camped here a few years back, capturing a few fantastic shots of the night sky with the Standards silhouetted in front, so I was pleased to return, if only briefly.

Today I wanted to get a bit further along, and after crossing the boggy Lamps Moss, I climbed up on to the enjoyable ridge above Mallerstang Edge, camping not far after High Seat.

The watershed turns to the west at Ure Head, and descends to the top of the Eden Valley, to where it crosses the Settle-Carlisle railway at Aisgill Summit, the highest point on the line.

Having lost all the height from the ridge to the east, the watershed then climbs back up a very similar elevation, to Swarth Fell Pike. From a peak-bagging perspective, it's a wasted ascent, since without reaching the true summit of Swarth Fell, it immediately starts descending back down again to the valley - and the railway - a little further south. However, Swarth Fell Pike is notable for a significant change of catchment area - this time on the west side. We've been following the Solway Firth catchment - via the Esk and then the Eden - for a long time, since barely half-way through the Southern Uplands. Now that changes: south of here, the watershed follows the Lune catchment, which in one sense moves us from north of the Lake District to south.

This was my final day, and though I had always intended to finish at Garsdale Head, I was in two minds as to whether to push on that little bit further, and reach Dent station instead. I might have had time, but I dithered, and eventually decided I had had a sufficiently successful trip, and that Garsdale station, being exceptionally close to the line of the watershed, made a sensible point to stop.

At Garsdale Head, the road, railway and watershed cross at more or less exactly the same point, where Wensleydale descends to the east, but all going in somewhat different directions. 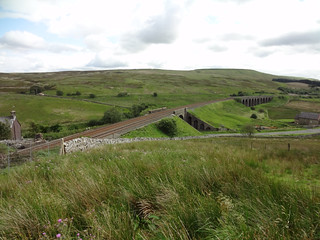 Annoyingly missing one train by less than a minute, I had an hour and a half to wait at Garsdale station. I watched a red squirrel emerge through a fence, look around before crossing the platforms and track and then exit through the fence on the other side. Some minutes later it returned, following the same route in reverse. It was clearly habitual behaviour, since perhaps 15 minutes later it repeated the same journey, again in both directions...