Part 5 takes me across the border into England. (None of this was written at the time – I found the phone signal in these parts to rival the Highlands in its sparsity!)

My plans to get the bus back to Whitrope failed, due in part to the bus company putting the wrong number on the bus in Hawick, and in part due to my own mistake in working out when and where alternative buses left from... So I walked several hours up the road - meaning it was already past 3pm by the time I was able to continue on the watershed route itself. Immediately I found long grass and awkward forest plantations would not be making my life easy. The forecast sunshine was invisible above the unexpected mist, too. 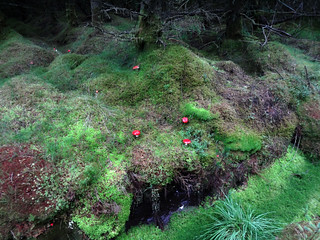 I had been hoping to make it out of the forest by the end of the day, but at sunset, having reached "Mag and the Bairns", the name the map gives to the cairns on top of Needs Law, I pitched camp.

I woke to a beautiful morning, and went all of about 10m before discovering I had camped right above an open quarry - just a small one, on the east side of Needs Law.

I had an easy way out of the forest, largely on tracks, which took me to a major watershed waypoint. 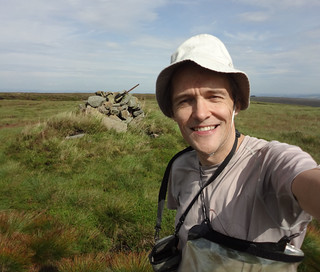 On the summit of Peel Fell

Its location on the English-Scottish border means that the summit of Peel Fell is well-known to walkers of the Scottish section of the watershed - it's frequently the point where they officially start or finish their journeys.

However – less often mentioned is the fact that it's not quite the end of the watershed's journey in Scotland. The route continues south-west for about 14km, with the border roughly following it. So I was to briefly dip into England before crossing back over to Scotland and ascending the Larriston Fells, the summit-line of which lies entirely within Scotland. 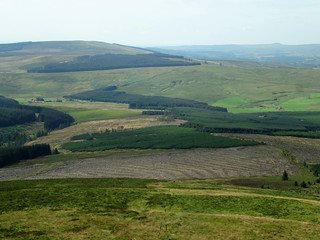 The view from Peel Fell towards the Larriston Fells, roughly following the border.

The day continued warm and sunny. A substantial monument at the source of the North Tyne was a good spot for lunch. Walking across these largely ungrazed moorlands was hard work and time-consuming.

Finally I turned south-east towards Hobbs' Flow. With a name like that, I was expecting wet feet, but it turned out not to be so bad. It's certainly a less enticing spot than Peel Fell, but in its way deserves equal recognition. This is where the watershed crosses the border and leaves Scotland behind for good. 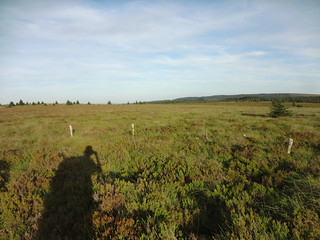 Not long after crossing the border, I properly entered Kielder Forest. The terrain was actually slightly easier in the forest, but no faster to cover ground. I camped shortly before leaving the forest, as the day's walking had taught me that there was likely to be little in the way of ground comfortable enough to pitch a tent on the open hillsides around here.

The watershed essentially describes a half-circle around the catchment area for Kielder Water (which drains to the North Tyne). Today's walk covered most of that. It was hot throughout, and the going was just as tough as on the past few days, particularly on the overgrown open fell tops. I'm conflicted, because while this is probably closer to the natural state of wild ground, crossing terrain like this takes substantially more effort than walking on the shorn grass of the Lake District, say, or the windswept high mountain tops of Scotland.

A small there-and-back side-trip to bag Sighty Crag, a Marilyn, gave me my only opportunity to glimpse the reservoir; it otherwise remained hidden behind the gentle hills and forests. 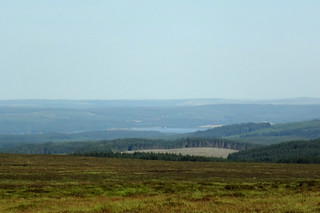 A glimpse of Kielder Water

I camped by a junction of tracks in the middle of Wark Forest, with plenty of distance still to cover on my final day, but having satisfactorily achieved my distance objective for today.

Surprisingly, I woke up to mist. It wasn't until I had left the forest, traversed a boggy section of moorland and re-entered the forest on the other side that it finally lifted for good. 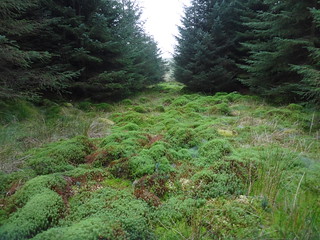 Trudging along another squelchy, mossy ride

At the minor summit of Burn Divot, I was delighted to find a herd of sheep. Suddenly walking became easy again. But it wasn't to last. Before long, I was back to toilsome long grass, home to numerous spiders who took pleasure in inflicting sharp bites - my best guess is that they were four spot orb weavers. I was kind of counting down the kilometres by this stage. There were some interesting views south to the various lumps which lie in-between the Pennines and the border hills. The day remained hot as I crossed Thirlwall Common, and upon reaching Gilsland, at the foot of Hadrian's Wall, I ended this leg, finishing with an easy walk down to Greenhead to get the last bus back to Carlisle.